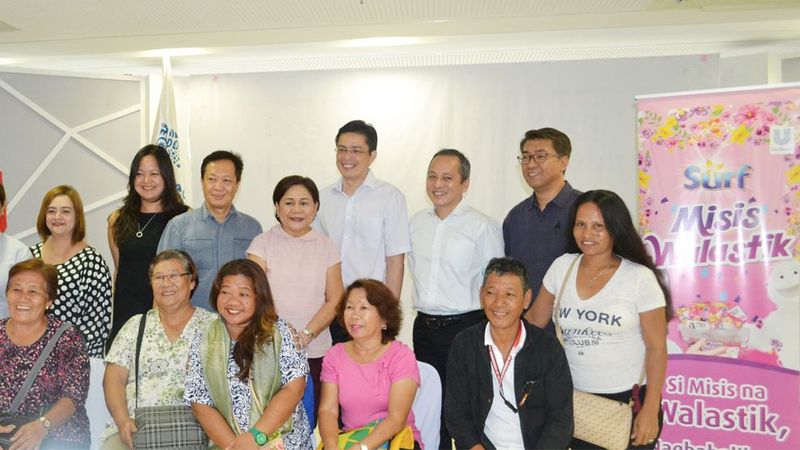 Unilever Philippines is embarking on an ambitious undertaking to significantly reduce the volume of sachet waste in Metro Manila and to reuse the waste collected as practical materials for the barangays of the cities that the company operates in. Single-use sachets have allowed a greater number of Filipinos from low-income families to avail of quality products in smaller quantities. However, while many have benefited from purchasing products in such packaging, the reality is that sachets continue to pose challenges to the environment. In Metro Manila alone, municipal solid waste (MSW) generated was estimated at three to four million metric tons mostly coming from residential areas. A closer look at the MSW generated shows that 28% are recyclables and of these, more than a third are plastics. While the Philippine government has put in place a waste management framework, Unilever Philippines is doing its part and taking the lead in sachet recovery efforts, with the launch of its latest Surf Misis Walastik program. “We are stepping up our efforts on sachet recovery as a means of further reducing our environmental impact. We have been doing sachet recovery efforts for several years, collecting as much as 185 million pieces of sachets in the past couple of years. The sachets collected were turned into fuel for energy and also cement pavers that were given back to the communities. In the years that we’ve implemented the program, we’ve made a number of adjustments to find the most optimal level of what can be done with the post-consumer waste collected,” explained Anna Mangilin, Marketing Director for Homecare, Unilever Philippines. The latest iteration of the Surf Misis Walastik Program finds Unilever Philippines partnering with local government units, barangays, NGOs, and community-based organizations to collect sachets. The program will be scaled up to hundreds of barangays in the coming years, starting with the communities of Manila, Pasig, and Taguig.
Attending the launch were community leaders from various barangays in Taguig, including: Ibayo-Tipas, Tanyag, Central Bicutan, Western Bicutan, North Signal Village, Pinagsama, South Daang Hari, Katuparan, Bagumbayan, Upper Bicutan, Lower Bicutan, and New Lower Bicutan. “Our partner local governments will be advocating for their constituents to collect sachets. Community-based organizations will then collect sachets from the households in their respective barangays. They then turn over the sachets to a hauler, which will then turn these over to us. Throughout the process, the Philippine Business for Social Progress will be conducting monitoring and evaluation,” Mangilin shared. The collected sachets will also be converted to chairs that could be used by schools, in partnership with the Villar Sipag Foundation. “What we are implementing is an end-to-end model on sachet recovery and conversion. Ultimately, we aim to scale up the model across key cities in the Philippines by 2020,” Mangilin added.
Delivering the keynote message at the launch event of the Surf Misis Walastik Program was Senator Cynthia Villar, who chairs the Senate Committee on Environment and Natural Resources.
“The Philippines is the third largest producer of plastics that could potentially go into the ocean out of 192 countries in the world. Plastics that reach the ocean lead to the death of fish. The Food and Agricultural Organization of the United Nations (UN FAO) estimates that because of mismanagement of plastic wastes and illegal fishing, by 2050, the world would have zero catch from the ocean and would depend on aquaculture for seafood needs,” Senator Villar stated.
The Senator further shared initiatives conducted at the community level to reduce the volume of wastes that go into various bodies of water, including weekly clean-ups of plastic wastes on the shore of the Manila Bay. She emphasized that the most effective environmental programs are tied to people’s livelihoods.
The National Solid Waste Management Commission (NSWMC) has also voiced its support for the initiative.
“This project is not new for Unilever. Unilever has always been at the forefront of recovering waste. Only 18% of the total population has access to sanitary landfills, so the big question is, ‘Where does the rest of the garbage go?’ If we’re able to convert 50% of the waste into compost, we will immediately cut the problem by half. If we can recycle what can be recycled, then we will significantly reduce the amount of residuals to be managed. If we can further reduce waste through this program, this can only be good for the environment,” stated NSWMC Vice-Chair Crispian Lao.
Waste recovery and reduction are central components of Unilever’s sustainability strategy. “We are mindful of the need to be efficient with our packaging and to find solutions in addressing post-consumer waste, especially at a time when resources are becoming scarce and communities are becoming increasingly vulnerable to climate change impacts. We are implementing solutions to prevent our packaging from going to landfills or ending up as litter. We also recognize that the challenge of reducing waste needs the collective effort of various stakeholders, which is why we’re also engaging communities to make it part of their consciousness,” explained Ed Sunico, Vice-President for Sustainable Business and Communications, Unilever Philippines. Globally, Unilever has decoupled growth from environmental impact, with special emphasis on addressing packaging, with initiatives ranging from rethinking design to including more recycled plastic in packaging. “Our sachet recovery efforts are part of initiatives to move closer toward a circular economy, wherein materials are recovered and regenerated instead of being used once and then discarded,” Sunico added.